The Milan Scottish Country Dancers meet at 20.30 most Mondays (except during holiday periods) at All Saints Church, Via Solferino 17, Milan for a couple of 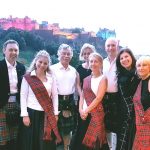 hours of Scottish dancing (ceilidh and SCD, but not Highland). The evening starts with a half-hour for beginners, which also serves for others to warm up. There is then an hour or more for everyone, followed by a half-hour session for advanced dancers. A 10-lesson course costs €50 (€80 for m/f couple), most of which gets donated to the church. The rest goes to our Dancers’ Fund which helps to sponsor our SCD trips elsewhere. Periodically, usually at the end of each course, we hold a ceilidh. And we celebrate two of Scotland’s main festivities: St. Andrew’s Night (in late November) and Burns Night (in late January).

Some history
As of yesterday (15/9/2016) I have been living in Italy for exactly 40 years. And for most of that time – on and off – I have taught Scottish Country Dancing. Things started to get a bit more serious about 17 years ago when I took over the Milan St Andrew’s Night from Jim Healy. He taught a class from the Benvenuto Club. But when he and his wife left, there was no longer that hard core of good dancers. After two years of declining dance quality, if was obvious that something had to be done about it. So I began with one course, essentially as a run-up to our St Andrew’s Night in November. The result was a distinct improvement in the quality of the dancing.

Here’s me making an announcement at the 2012 St Andrew’s Night (note the magnificent wooden dance floor, which is why we keep going back to the Crowne Plaza in San Donato Milanese)

And we haven’t looked back since. The number of courses has increased, this last year being the most active of all: three standard courses and two advanced courses. Why the extra courses? Because last year (2015) we discovered “dance tourism”.

The first event that we attended as The Milan Scottish Country dancers was a Reels Night at the exclusive New Club in Edinburgh in April 2015. This was chosen partly for the venue – on Princes Street with views over the gardens to Edinburgh Castle and the Old Town – and partly because the dance programme was very much pitched at our level: neither pure ceilidh, nor pure RSCDS.
To explain, Scottish Country Dancing, in its broadest sense, covers a very wide range of dances, some of which are very simple, ones that anyone can pick up from a good caller and do after 5 minutes tuition. These are usually referred to as “ceilidh dances” (ceilidh – pronounced kaylee – being the Gaelic word for a gathering with music, song, dance and storytelling, nowadays used to mean essentially a dance). Given that ceilidhs often have people who have never danced before, the result can be fun, but fairly chaotic. Then there are the more complicated dances that really need to be taught at a course, because it might take a hour to learn it and lots of practice to do it properly.
“Properly” is, of course, open to interpretation. My approach is to get the movements right, the footwork reasonable, and the rest is fun. Then there is purist approach – close to ballet – which is that of the Royal Scottish Country Dance Society. They enjoy themselves too, but they tend to be dancing in competitions, so there is a strong pressure to get it absolutely right, their way. Plus they tend to go in for obscure dances that are totally unknown to the “masses”, who, if they dance at all, only know what some purists disparagingly call “wedding dances”. So these are the two extremes: ceilidh and RSCDS.
Where am I? In between. I embrace the basic SCD repertoire, which are the 12-15 dances that you will usually find at any Scottish wedding. Some may be ceilidh dances (Dashing White Sergeant, Gay Gordons, even the Eightsome Reel, which no one would call simple), others may be more complex, but widely known because they are standards (Hamilton House, Duke of Perth, Duke & Duchess of Edinburgh, Mairie’s Wedding). If you then add the Foursome Reel, the Reel of the 51st Division and the Inverness Country Dance (aka Speed the Plough), also fairly standard, you have the programme for the New Club’s Reels Night.
Here are some photos from that first Reels Night in April 2015:

Perhaps worth mentioning that while these trips appear to be entirely SCD based, the dancing is to a certain extent an excuse: an excuse to travel and visit new places. Clearly Edinburgh wasn’t new for me, as I come from there, but it allowed me to show the others my city.
We started off on the Friday afternoon when we went down to Leith to visit one of Edinburgh’s leading kilt makers, Kinloch Anderson. There I bought myself a new day jacket and waistcoat. The others bought a series of items. Daughter Sara ordered herself a knee-length kilted skirt (kilts are for men) as she’s had enough of wearing her mother’s floor-length kilted skirt (in centre of photo above).
On the Saturday, we woke to pouring rain, which duly stopped at 9.00 am the minute we stepped out of the New Club (all armed with its plentiful supply of umbrellas, which we kept with us all day, more for superstition than anything else because it didn’t rain again). We started off at Edinburgh Castle, which seems quite pricey to get into (£16.50 + £3.50 audio guide), but it is in fact excellent value. With the audio guide (available in several languages), each member of the group was able to visit in their own time and listen to as much or as little as they wanted. I’ve been to the Castle dozens of times, but this was undoubtedly the most satisfying tour, partly because the various museums have been improved considerably, and partly because the audio guide gave me far more useful input than just wandering around looking at things.
Afterwards, we wandered down the Royal Mile – or more technically, the Lawnmarket and the High Street), deviating to take in the Grassmarket, and ending up at The World’s End, just below John Knox’s House, for an excellent pub lunch: I had haggis, neeps and tatties with an excellent pint of the pub’s own 80/- (they don’t call it “heavy” any more).
This was followed by a walk across North Bridge and up Calton Hill to catch what is one of the iconic views of Edinburgh:

Strolling back to the Club, we stopped off at the Café Royal, one of Edinburgh’s classic Victorian pubs. The day then closed with an excellent dinner in the Club’s magnificent dining room. The next day we had a morning flight, so had to leave immediately for the airport. No more tourism. Next time round 23-25/9, we have an evening flight, so we’ll have most of the Sunday to sightsee as well (probably a walk up Arthur’s Seat and lunch at the Sheep Heid pub in Duddingston).
Caledonian Club Reeling Evening, London
Our second outing was to London, for a Reeling Evening at the Caledonian Club in February 2016.

This was a much more formal affair, so just as well our ladies had decided on a “uniform”, a specially made copy of the long black skirt that originally belonged to Caterina’s grandmother! So they were all looking very elegant indeed on the night (as you can see from the photos on in the Gallery).

On this occasion, the programme was a bit more impegnativo, but we had done our homework and managed to dance just as well as the other 90-odd people in the room. In fact, we received quite a lot of compliments from the others (probably expecting the “Italian group” to mess things up for the others!). For this evening, we had to learn Scotch Mixer, St Andrew’s Fair, The Piper and the Penguin (great fun!), Butterscotch and Honey, Monymusk, The Byron Strathspey and The Sailor. So with these, we were beginning to build up a repertoire of Strathspeys. On the tourism front, we had a long walk in Hyde Park on the Friday afternoon (while the ladies went off to shop). Followed by the Reeling Evening, which was a formal dinner dance.
On the Saturday, we visited Guildhall and its Galleries and the Museum of London in the morning, then walked to the Fox & Anchor, a lovely old wood-panelled pub for lunch (where I also managed to catch the Scotland v Italy Rugby International). On the way, in Charterhouse Square, we even found ourselves outside Poirot’s house/office. Supper was at The Grenadier in Belgravia, another gorgeous old pub (once we’d found it!). Both pubs were full of atmosphere, but not exactly full of space. At least not for a group of 8-10 people. On the Sunday, we took the Tube to Blackfriars and crossed the Millennium Bridge (first time, for me at least).
Then we visited the Globe Theatre and took the tour. Fascinating! Then it was time to head for Gatwick and back to Italy.
Upcoming events
We have quite an ambitious events calendar looking forwards a few months:
23-25/9 Another Reels Night at the New Club, Edinburgh
1-2/10 Clivis SCD Society’s 25th Anniversary Ball in Acqui Terme (for which we’re learning 15 new dances!)
3/10 New course in Scottish Country Dancing starts in Milan (course already running in Como)
19/11 St Andrew’s Night, Milan
26/11 St Andrew’s Night, Como
2-4/12 Aberfeldy Highland Ball in Blair Castle, Scotland (for which we’re learning 8 new dances)
21/1 Burns Night ?

There are no upcoming events.